From Yachts and Yachting - courtesy of Cliff Milliner:

Forty-four Supernovas descended on Exe Sailing Club for the 2018 Supernova Sea Championships in response to the promise of wind, waves and... dolphins! With a forecast of 10-12 knots and gusts in the 20s everything was in place for competitors to put into practice some of the lessons from the previous day's Association-funded training session, ably administered and ring-mastered by Ross Harvey.

The first race started in about 12 knots of SSW'ly breeze and with the fleet making a clean getaway at the first time of asking. It was local sailor and reigning National Champion Iain Horlock who was establishing the first leg of what promised to be an 'horizon-job' after taking the inshore option on the first beat. He was followed at a respectful distance by an array of the usual suspects; Gav Young (Cotswold), Cliff Milliner (Cotswold), Mike Gibson (Bartley), et al., along with James Gerwat (Felpham) who'd had a cracking first leg. As the leaders rounded the leeward mark for the final time the wind made a significant lurch to the right which dragged Young and Milliner above the isolated Horlock. This allowed Milliner to take a previously unexpected win followed by Young with a gently fuming Horlock in third.

The frequent dark clouds passing through the race area caused a series of 'unignorable' (is that a word? Ed: No!) wind-shifts which made PRO Mike Way's task less than straightforward. A relocation of the Committee Boat and a postponed start whilst 'in sequence' was finally rewarded with another clean getaway. 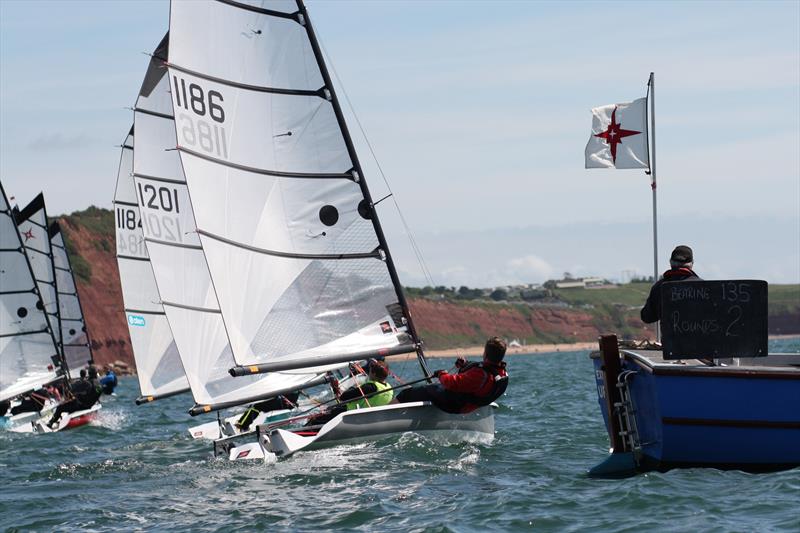 The first beat saw the breeze slowly building into the late teens of knots and it was Alistair Glen (Exe) and Gav Young who made the most of the conditions to reach the windward mark ahead of Matt Williams (Cotswold). The increase in wind strength to the lively side of frisky, along with the mounting sea state, gave two cracking reaches with Glen and Young tussling all the way to the leeward mark. The ensuing beat was probably even windier and the already lengthy beat seemed even longer to tiring legs. Glen made the most of a small wind shift to pull out a lead on Young, only to be undone by a brief swim whilst trying to avoid a small fishing boat (oblivious to the race going on around it!) and some crab pot markers. Glen just rounded the windward mark ahead of Young but it was Young who rounded the leeward mark first. So intent were the two leaders that they hadn't noticed local-hero Horlock, who had somehow clawed himself back from a distinctly average (for him) first beat, and was able to take advantage of a change in wind direction to pop across the opposite end of the line from Young and Glen to take the win. Throughout the fleet there was a lot of close racing, given the conditions, and there were many tales to tell at the end of the first day. And yes, there were dolphins playing alongside and under one of the boats to the pleasure of those who witnessed them.

With the Met Office's finest predicting 12kn SSE (20kn gusts) for Sunday it was time for some ibuprofen with a paracetamol chaser!

After a great evening of eating and a little drinking in the club, everyone was treated to champion sailing on day 2. A sunny day with a consistent force 3 meant everyone who went out had a great time. The Race Officer did a great job of turning round four races on a well set triangle-sausage course.

In race 1 Ian hit the front again, but this time was closely followed by the chasing pack of Snell, Young, Milliner, Glen and Gibson. These five fought hard and kept close to Ian, but stayed that order to finish.

Race 2 saw everyone finding their legs in a slightly nicer swell than Saturday. Ian again led the way up the first beat and reach, but didn't have it all his own way as Milliner closed to challenge at the bottom mark, closely followed by Snell and Gibson. It was tight up the next beat, but Ian held his lead to take the win followed my Milliner and Snell.

In race 3 the leaders came from the pin end of the start, tacking onto port and crossing the fleet. Ian's upwind speed meant he led again, but this time Milliner managed to close the gap going low on the reach to round the bottom mark just in front, closely followed by local Exe sailor and Master, Glen. Milliner marked Ian closely up the final beat to make sure he held the lead to the finish with Young pulling into 3rd.

For a change the Race Officer set a gate start in race 4 lead by Gibson. Most of the front runners went early and struggled to cross the fleet, but Snell started late and nipped into second at the top mark, following Ian once again. There was a tight group of the usual suspects hot on their heels but this time the Williams brothers Matt and Chris were in the hunt as well. Ian hung on to take another win from Snell, Glen and Matt Williams.

Ian Horlock convincingly won the event with four 1st and a 2nd, showing upwind speed most of us can only dream about. Milliner piped Snell for second by 1 point. Chris Williams in 7th won the silver fleet, Glen in 5th was first Master, Steve Mitchell first Veteran, Jonny Everett first M1 and Serena Stewardson in 30th was First Lady.

Exe put on a great spread of cakes to end the day on a sunny balcony, big thanks to all at Exe who looked after us very well!