This is day one of the South Eastern Double and the camping base for both.

This popular South Eastern event is a firm favourite of many and generally enjoys a competitive turnout. Camping is available for early arrivals and boat drop off on Friday evening; See the NOR for event and contact details.

If possible print off the entry form, fill it in and bring it with you; pay on the day.

It was a windy weather forecast, reduced turnout of 13 Supernovas, including 3 local sailors and 10 visitors, plus a modest fleet of Lightening 368s at the Hunts SC, re-scheduled, late season, combined event Open. Competitors were greeted with a challenging 16 gusting 27 knots of squally breeze when surveying the lake at the race briefing. Luckily this reduced by actual launch time, to more like the forecast 14 gusting 24 knots, although one or two of the signed on competitors sat out the first race start, saving themselves for the after lunch promised amelioration of conditions.

RO Colin Hall carried out a thorough race briefing and set an ideal course given the strong gusty wind conditions, and most got away cleanly for the first race start, with one or two struggling with the conditions.

Local sailor, Jon Pebody, and Richard Lambert (Bough Beech), plus Nick Whiles (Girton SC) and Steve Jellicoe (Olton Mere) got away to lead the fleet towards the windward mark.

Jon Pebody led for much of the race, but the RO had related a full hour of sailing competition, so plenty of laps ensued. Richard managed to fight through into first place with a leg or so to go. Final result Richard Lambert first, Jon Pebody second and Nick Whiles third , with Steve Jellicoe from Olton Mere SC showing some high wind quality to take fourth place.

After a hearty Hunts SC lunch, the sailors went back out into a variable but definitely less challenging  8 - 12 gusting 19 knots of breeze and occasional full sunshine for the start of the afternoon's sailing.

The start of the second race was preceded by some mark position adjustments by the RO.

Richard Lambert and Jon Pebody led off the line with Martin Burgess (Bough Beech SC) and Tony Bleasdale (Girton SC) close behind around the windward mark. In hot pursuit were Nick Whiles and Steve Jellicoe. The breeze still had a few gusty surprises, that led to a few capsizes on the course, plus a few place changes on the way, not to mention some warmimg work for the safety boat crews.. Second race result, 1st Richard Lambert, 2nd Jon Pebody, 3rd Martin Burgess.

Race 3 began on the same reset course and although Richard had the event title secure, he was still competing for a third bullet. Tony Bleasdale was keen to get a podium position so a front of fleet battle ensued. After a few place changes Richard came out on top with Tony in second and Steve Jellicoe led the following fleet home in third. 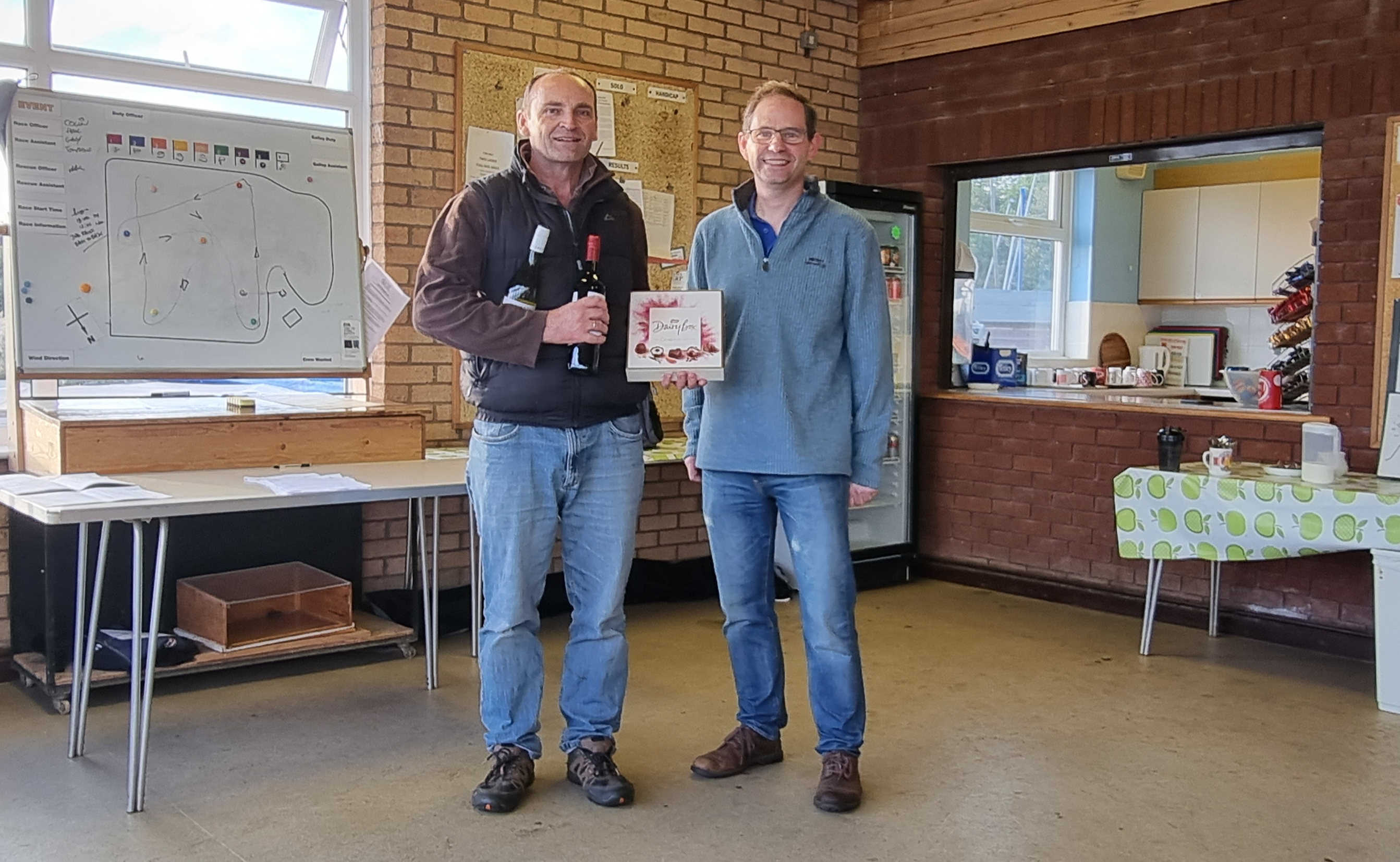 I am excited to announce that I have now completed this years Nationals Top 10 Advise and Tips article. Thank you again to everyone that contributed, I know our members really appreciate you sharing your thoughts and tips, its another great example of the classes inclusivenss and drive to give everyone the opportunity to learn and improve. It is a large article filled with plenty of great thoughts, advise and tips, so grab yourself a large cuppa and sit down somewhere quiet, happy reading

This year's national event pack and the event NOR/SI are now available to download via the "Event Information" subpage. Please be aware that paper copies will not be provided so you may want to print copies prior to the event.

There are still a few campervan spaces available at the centre. If you want to book one please contact Plas Heli directly or book via their website.